I follow a hysterical blogger named Victoria Elizabeth Barnes who is always on the hunt for treasures and is redoing her house.  She reminds me so much of my younger self when my husband and I were buying old houses and had a great time (ha!) doing renovations.  I look back at one particular year spent without a kitchen, with two small children, washing dishes in the bathtub and it is hard to imagine how I juggled things.  Youth and the excitement of gutting your house must have made me oblivious to things that would be not so great now.  I also made some wild purchases, like when I bought a huge mirror (and not inexpensive), from a “Rocky” in Syracuse New York on Ebay!   He had purchased an old Victorian mansion and needed cash so was selling off some of the original pieces from the home.  I had to walk him through how to pack and ship it, and eventually it arrived safely.  Whew. 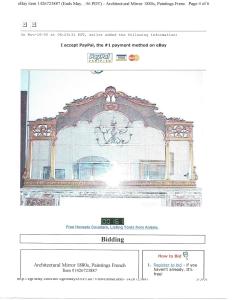 We still like projects,  like the new barn we just built.  These projects give me an excuse to seek out treasures to use in the design/build.  It satisfies the urge to hunt for treasures.  But honestly, that urge has died down tremendously over the last decade.  This is due largely in part to the emptying of both my mother-in-law’s and my parents’ home.  That is enough to keep you from ever wanting to buy anything. Ever. Again.

This weekend is the Renninger’s Antique Extravaganza  that happens three times a year in Mt. Dora, Florida.  There are over 1500 dealers from across the country who spread their wares under acres and acres of live oak trees.  Over the years I have found some great stuff at this event.  Eventually you have enough stuff, but that doesn’t quench the antiquing thirst.  Therefore the inspiration to open a shop.   After giving up my full-time career of 20+ years to be home more with my family, I still needed a working/creative outlet.  I had purchased a small commercial building that my husband and I renovated with build-to-suit tenants…and I just happened to have 800 empty square feet with a huge display window.  I convinced my husband that I wanted to do a great display and help entice more retail to that end of the shopping community where we were located.  My initial plans were to recycle some of my antique finds and “fill in” with trips to the Merchandise Mart in Atlanta.  I was also only going to  have select days/hours, so that I could do the kid’s carpools for sports, etc..  I think we all know here what the reality was.  I got to go shop for really cool stuff that I liked, attend The Market twice a year, and fulfill a common dream of owning your own place.  The shop kind of took off, and with that came pressure to have more normal hours and so I had help come in the afternoon to spell me for after school duties.  I soon was immersed into the retail world of holidays and weekends. One of our tenants moved out so I expanded and had even more room for really great stuff. Things were sweet for about 5 years, and then the real estate bust hit Central Florida.  People stopped buying houses and accessories for them.  When one of my other tenants needed more office space, I quickly made the decision to shut down.  So we had the going out of business sale, paid off the bills, and that was that.  People still tell me they miss my shop and ask if I miss it as well.  I miss purchasing and staging the shop, but not competing with the internet and having no control over the economy.  At this stage,  I much more enjoy being the landlord and collecting rent.

Back to Renninger’s Antique Extravaganza this weekend.  Last year I found some great stuff to use in the new barn we were building.  I found tables and an unusual sink piece for my tackroom, and some great signage.  I found a really cool horse head out of teak that was way too expensive for me, but at this January’s Extravaganza I found one just like it for 1/3 of the price!  It now lives on our property on a tree stump and looks like it was carved there. 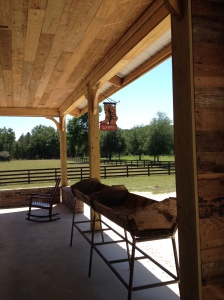 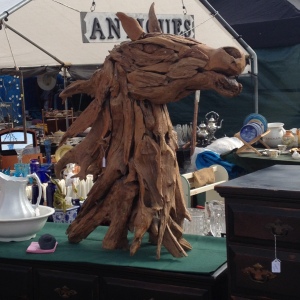 This past year we cleared out my mother’s home when she moved to a senior housing high rise.  She was on the verge of becoming a hoarder (without the dead animals and her house was clean).  She would tell you she is a “collector”. ( I must come by this hunting gene naturally).  Anyway, after dealing with all of her “stuff” and the extensive estate sale, it made me want less stuff of my own.  So when I called my antiquing buddy to see if she wanted to go to Renninger’s with me on Friday, she informed me that after spending the last month clearing out her now deceased parent’s home, she never wants to lay eyes on another old piece of anything.   I told her I was going to get in my steps on my new FitBit, by walking all of those acres and “just looking”. Right .