Last Saturday I attended a gathering of about 40 folks who were invited to a surprise 60th birthday party for my longtime friend, Margie.  Her husband had pulled off the nearly impossible feat of actually surprising her with this lovely dinner, where her immediate family and her closest friends with their significant others, lied in wait for her arrival.

I met Margie on the first day of 5th grade when I moved to a new neighborhood and was attending a new school.  She was that angel who welcomed me and we became best friends.  For the next two years we rode bikes or walked to school together, had sleep overs, cheered peewee football, and had the carefree childhood you could have back then.

When we went to Junior High (the Baby Boomers equivalent of Middle School) we merged with the other elementary schools in our area and I learned to “share” Margie with the new girls.  We became this great group of friends who stayed close through high school, college, and were in each other’s wedding.  Almost 50 years later, here we are.

Quite a few of us, including Margie, went out-of-state to college and worked elsewhere for a time, but eventually returned to Florida and this same community. The husbands are mostly from other towns and states, and were brought into this circle through marriages and children, many who have grown up together.  These special guys have formed long-time friendships as well.

The dinner party was pretty boisterous and then the toasts began.  Her sister, children, and their spouses all were charming with their expressions of true love and appreciation for this gift of a “Gigi” they were blessed to have.  Her husband choked up recounting how they met and when she agreed to “have him”  (set up by a friend and her husband who was this ex-football player’s roommate at Florida). Her “newer” friends told of how she had nurtured and inspired them. Then it was our turn.  There was our gifted one-woman of a show, who was her college roommate.  Wearing one of their sorority jerseys (a little tight she proclaimed but she could still get it on!), she read a hilarious poem depicting their escapades in high school and college at Clemson University.  I got to toast her and claim the “official longest friendship in the room”.  Seven of us performed a song and dance tribute to Stevie Wonder’s “Isn’t she lovely”  changing the words to describe our friend. Yep.  Sixty year-old women sporting wigs (brunette in her honor) and performing a show that took multiple rehearsals to get it right.  Now you see the “love” required to participate in this kind of behavior!

So who is this person that has generated such love and devotion (and she was horrified, by the way because she is usually the “giver”).  My friend, Margie, is the most unselfish, and truly genuine person I know.  She is the one we all have called on for help and advice.  She is the organizer of food and duties when we lose a loved one. She is the one you can laugh with until your sides hurt horribly or you wet your pants.  She  is the devoted daughter, wife, friend, mother and grandmother we all strive to be.  This is just second nature to her, without any hint or expectation of acknowledgment .  She is genuinely that good.

One of the husbands,  who was sitting at our table, leaned over to me with huge tears in his eyes and told me this.  He said he had watched our group’s friendship through the years with utter amazement.  He grew up in the military and moved seven times during his school years.  The fact that this group of friends has such history and loves each other to this day, still amazes him.

Thank you Margie for the gift of friendship you have given to me all these years.  I am a better person for knowing you. 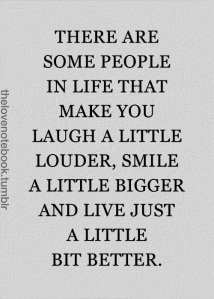